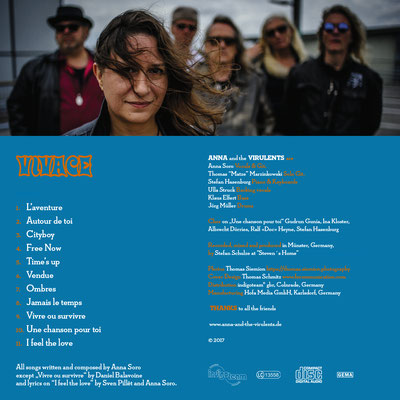 Anna Soro, born in Paris, France revives her musical roots of the 70s. In her home from home, Münster, Germany she is well-known as a bass guitar player in Blues, Rock and Pop outfits.

In 2012 she has founded “Anna & the Virulents”. Writing both in English and French she is equipped with a guitar and has taken a step forward to the microphone.

Classic old school rock in the vein of the 70s, a bit of French esprit and tons of heartfelt emotions are the ingredients of her refreshing songs. Each one has a unique story to tell and does so straightforwardly and honestly about emotions, lust for life and hard landings. Backed up with a versatile and tight band, her songs are performed by well-seasoned musicians celebrating special chemistry between them.

After their first Maxi-CD, Anna & the Virulents release their first album VIVACE in 2018.

In their dynamic production, the band shows versatility and vitality, rough rock from the heart with an eye and ear for details sound- and arrangementwise.

The playlist of 11 songs is extremely diverse, ranging from sunshiny, passionate, sentimental to real heavy stuff. The compositions reveal some of the musicians roots which are a tongue in cheek tribute to the old masters of rock.

In good old school rock tradition with a well perceptable touch, each song is about the ups and downs, even the only cover song of this album, “Vivre ou Survivre” released by the french singer Daniel Balavoine, you can recognise the band‘s style and how they reanimated the song.